Simon Marcotte, President and CEO of Royal Fox, commented: “We are excited to unlock the value of this project, as the new context dictates a different and systematic approach, allowing us to deliver results from extensive historical drilling never previously assayed. As we aim to deliver a maiden NI 43-101 resource calculation on the deposit in 2022, this data will be combined with historical figures along with the results of a drilling campaign of more than 10,000 metres currently being planned for the upcoming winter. We see the Philibert deposit becoming a pillar in the camp of Chibougamau.”

The Philibert deposit, located 60 kilometres southwest of Chibougamau, Quebec, is defined by 60,000 metres of historic diamond drilling, including approximately 25,000 metres of unsampled drill core, from campaigns completed between 1952 and 2014. At the time, gold prices favoured the development of the Philibert deposit as an underground resource. However, today’s gold price environment, combined with the recent discovery of the Nelligan deposit located 9 kilometres to the southwest, re-establish the district and Philibert as also amenable to open pit resources.

As such, Royal Fox initiated the first phase of a sampling program, which included 573 samples selected from 31 drill holes. While only 180 samples have been returned thus far, results include a new high-grade intercept for hole 981-12-268 (2012) with 9.77 g/t Au over 4.0 metres, including 23.4 g/t over 1.5 metres between 111.5 metres to 115.5 metres. Results from the remaining 393 samples, representing 69% of the first phase of sampling, will be released as they are received. Given the significant results returned to date from the first phase of this campaign, the Company is developing plans to commence the second phase of the sampling program, targeting further unsampled intervals proximal to mineralization and areas with open-pit potential.

Adree DeLazzer, Vice-President Exploration of Royal Fox, commented: “The results released today show both high grade intercepts and broad lower grade intercepts, which is key to building the deposit into an open pit resource. We are pleased with the results released today and the continuity we see with gold along strike. It highlights the potential to grow the deposit both along strike and at depth.”

Unsampled intervals limit the geological interpretation, especially between staked mineralized domains. The Company believes this sampling program continues to support the evaluation of the open pit resource potential of the deposit. This first phase of the sampling program focused on mineralized domains west of the Obatogamau Fault and near surface. Geologists ranked unsampled intervals using intensity of silicification, alteration, and sulphide mineralization to prioritize sampling. The new high-grade intercept is within the modeled mineralized domain 37-2 and hosted in the Philibert gabbro sill with deformed quartz-sulphide veins. The addition of this intercept improves the continuity of the domain to the west. Sampling results from other sections and holes return high background values in the 0.1 ppm Au range over 5 to 10 metre widths. See Figure 1 highlighting the sampling gaps within the Philibert Deposit, and the cross section in Figure 2 illustrating the section line 11320W with drill hole 981-12-268. 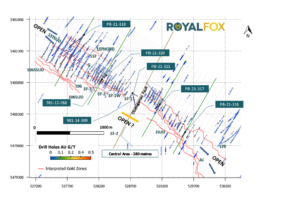 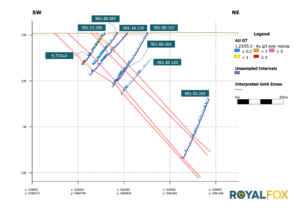 As part of the due diligence process, and to expand its understanding of the mineralization in order to support the design of more extensive drilling campaigns, Royal Fox drilled five diamond drill holes, totalling 1,147 metres during the property acquisition process in March and April 2021.

To date, only 256 assays from the 921 samples sent for analysis in June have been received from the labs, representing partial results from all five holes. Results received included hole PB-21-316 returning 1.23 g/t Au over 55.5 metres. Table 1 sets out the highlights from the results received to date. The results from the 665 outstanding samples, representing 72% of the 2021 drilling campaign, will be released as they are received.

Table 1: Highlights from the assays received to date.

Diamond drilling targeted the near surface mineralization of the Philibert deposit, to replicate and verify reported intercepts, focused on four key areas – N1, N7, S1_S2, and S3_S4 where mineralization is most amenable to open-pit mining methods.

The campaign targeted the 3-kilometre trend of near-surface mineralization of the Philibert deposit, including 15 mineralized domains associated with northwest-trending shear zones, related to the Opawica-Guercheville Deformation Zone, a large system of anastomosing shear and fault zones and host to numerous mines including the former Joe Mann Mine, which has an historical cumulative production of 4,754,377 t grading 8.26 g/t Au (Faure, 2012). The mineralization is parallel to sub-parallel to the northwest-southeast striking gabbro sills of the Philibert Horizon, with moderate dips to the northeast and commonly associated with disseminated pyrite and pyrrhotite in silicified shears zones.

The Philibert deposit is separated into the East and West zones by the north-northeast late aged Obatogamau Fault, interpreted from geophysical surveys and drill core. Mineralization has been interpreted on both the east and west domains to stop at the fault for 280 metres along strike; however, very little data supports this presumption. In fact, drill hole 981-14-300 returned 1.89 g/t Au over 11.3 metres, which appears to be correlated to the eastern domain JSUD. Adding continuity between the modeled domains on the east and west sections of the Philibert deposit would potentially add significant tonnage and improve the economics for an open pit resource.

Starting in the southeastern end (section 097060W – S3_S4 whittle shell) of the 3-kilometre trend, drill hole PB-21-316 intersected a broad zone of gold mineralization from 30 metres to 85.5 metres which returned 55.5 metres of 1.23 g/t Au including a high-grade zone of 9 metres of 3.34 g/t Au. Results from PB-21-316 verified the historical intercept from drill hole 981-12-244 of 55 metres of 2.3 g/t Au, with the location of higher-grade results being almost identical. (Note: the two intercepts would be very similar with grade capping.)

Mineralization along the southern trend of Philibert is modelled as four stacked tabular zones (Ai, J, JSUD and 179) that are sub-parallel to stratigraphy, ranging from 1 to 15 metres in width, moderately dipping to the northeast, and are traced up to 1.5 kilometres along strike, with mineralization open along strike and at depth. See Figure 3: plan view of the Philibert trend with geology, Figure 4: long section of the Philibert trend looking northeast, Figure 5: section 09760W, and Figure 6: core photos of the mineralized zone in hole PB-21-316. 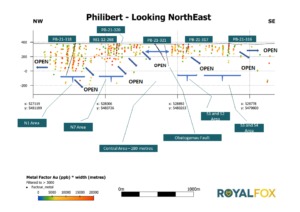 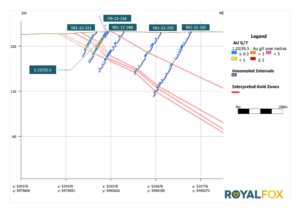 Moving northwest to section line 10320W, hole PB-21-317 was drilled to test the three staked mineralized domains, which continued from hole PB-21-316 and whittle shell S1_S2. Assay results are still pending for PB-21-317 from samples within the mineralized zones. Results did return 2.16 g/t Au over 1.5 metres between 124.5 and 126.0 metres. Historic intercepts in the area returned 3.39 g/t Au over 13.7 metres in drill hole 981-14-308 associated with strong silicification and disseminated pyrite mineralization.

Drill hole PB-21-321 tested the Obatogamau Fault, which was drilled at a 120-degree azimuth to get a perpendicular transect across the fault and to test for potential mineralization; assays are pending. Historically, three drill holes have tested this area with hole 981-14-300 returning an intercept of 1.89 g/t Au over 11.3 metres between 159.7 to 171 metres. This intercept appears to line up with the mineralized domain JSud; however, no domains were modelled through the central area. 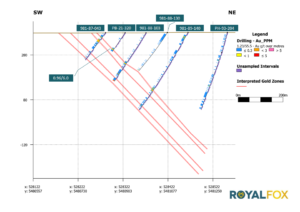 The most northwestern drill hole, PB-21-318, was drilled from section L11920W to test 8 stacked domains, including 137, 137SUD, 137NORD, G, 37-1W, 106, 106SUD, and 106SSUD. The drill hole deviated towards the West over 100 metres and stopped short of the most southern domains: 106SSUD and 106SUD. To date, the Company received results from two domains, including 137SUD which returned 1.34 g/t Au over 6 metres between 195 metres to 201 metres. The intercept is hosted in altered volcaniclastics with quartz-carbonate-pyrite veins and disseminated pyrite, and located near to the upper contact with a sheared gabbro. The second intersection returned 1.57 g/t Au over 2 metres, between 404 and 406 metres, from domain 137-1W hosted in basalt with 7% quartz-sulphide veins. See Figure 8 for section 11920W.

True widths of the intercepts reported in this press release have yet to be determined but are estimated to be 60 to 70% of reported core lengths. All NQ-size split core assays reported for 2021 were obtained by fire assay with atomic absorption finish and samples returning values over 5 ppm Au are re-analyzed, utilizing standard Fire Assay-Gravimetric methods. Samples were shipped to AGAT Laboratories with sample preparation done in Val d’Or, QC and sample analysis in Mississauga, ON. The quality assurance and quality control protocol include insertion of blank or standard every 10 samples on average, in addition to the regular insertion of blank, duplicate, and standard samples inserted by AGAT Laboratories during the analytical process.

The technical content of this release has been reviewed and approved by Adree DeLazzer, P. Geo., a Qualified Person as defined by the National Instrument 43-101.

Royal Fox Gold Inc. is a mineral exploration company focused on the development of the Philibert Project near Chibougamau, Québec. The Philibert Project comprises 110 mineral titles having a total approximate area of 5,393 hectares of highly prospective ground, 9km from IAMGOLD’s Nelligan Gold project which was awarded the “Discovery of the Year” by the Quebec Mineral Exploration Association (AEMQ) in 2019.

To date, more than $10M (historical) have been spent on the Philibert Project, with more than 60,000 metres of drilling completed. The Company is focused on de-risking the asset and releasing a maiden NI 43-101 resource estimate which will incorporate results from both brownfield and greenfield exploration, combined with extensive historical data. The Philibert Project is owned by SOQUEM. Royal Fox is currently undergoing an ownership option process, details of which can be found in the corporate presentation available on the Company’s website. More details are available in the corporate presentation of Royal Fox at: www.royalfoxgold.com.

SOQUEM, a subsidiary of Investissement Québec, is dedicated to promoting the exploration, discovery, and development of mining properties in Quebec. SOQUEM also contributes to maintaining strong local economies. Proud partner and ambassador for the development of Quebec’s mineral wealth, SOQUEM relies on innovation, research, and strategic minerals to be well-positioned for the future.

ON BEHALF OF THE BOARD OF DIRECTORS