ROYAL FOX REPORTS MINERALIZATION FROM THE FAULT ZONE INCLUDING 3.86 G/T GOLD OVER 15.0 METRES AND 4.29 G/T GOLD OVER 21.5 METRES FOR THE FENNEC FOX ZONE

Simon Marcotte, President & CEO of Royal Fox, commented: “The results from the Fault Zone demonstrate the potential for continued mineralization within the 300-metre gap between the northwestern and southeastern domains of the Philibert trend. We are optimistic that further work in the area will link mineralization of the northwest and southeast zones. Additionally, the high-grade results of hole PB-22-377, drilled in the northwestern limit of the Fennec Zone, highlight the opportunity to expand the near surface high grade mineralization along the Philibert trend.”

Royal Fox is reporting results today for eighteen drill holes, two of which tested the Fault Zone area and sixteen which tested the Fennec Fox Zone. Drilling tested mineralization over a 480-metre strike length and up to 250 metres vertical depth. The best hole reported today was drilled at the northwestern limit of the defined Fennec Fox Zone, where the late aged NE-SW oriented Obatogamau Fault transects the NW-SE oriented mineralized Philibert trend. Drill hole PB-22-377 returned 4.29 g/t Au over 21.5 metres from 78.5 to 100.0 metres from a highly pyritized, ankerite altered, quartz-rich gabbro of the Obatogamau Formation. Mineralization intersected in drill hole PB-22-377 represents a significant future target for the company to expand near surface high grade mineralization along the 3-kilometre Philibert trend.

Interpreted from historical diamond drilling and geophysical surveys, is the NE-SW-oriented Obatogamau Fault located at the northwestern limit of the Fennec Fox Zone. With only limited diamond drilling and no surface exposures in the area, the degree and direction of displacement of the Obatogamau Fault are unknown. However, the area represents a 300-metre gap in mineralization along the strike between the Fennec Fox Zone and Arctic Fox Zone. Results from this release include drill hole PB-22-382 drilled 150 metres to the northwest of the Fennec Fox Zone, which intersected 3.86 g/t Au over 15.0 metres from 198.0 to 213.0 metres representing a significant discovery and highlighting the opportunity to define and connect the mineralization over the 3-kilometre strike length. Mineralization is associated with a brecciated, strongly carbonatized, pyrite-pyrrhotite mineralized, quartz-rich gabbro of the Obatogamau Formation. Drill hole PB-22-379 drilled 40 metres to the southeast of PB-22-382 intersected similar mineralization returning 1.15 g/t Au over 19.4 metres from 167.6 to 187.0 metres.

Table 2:  Complete results for the Fennec Fox and Fault Zone area from the 2022 diamond drill program 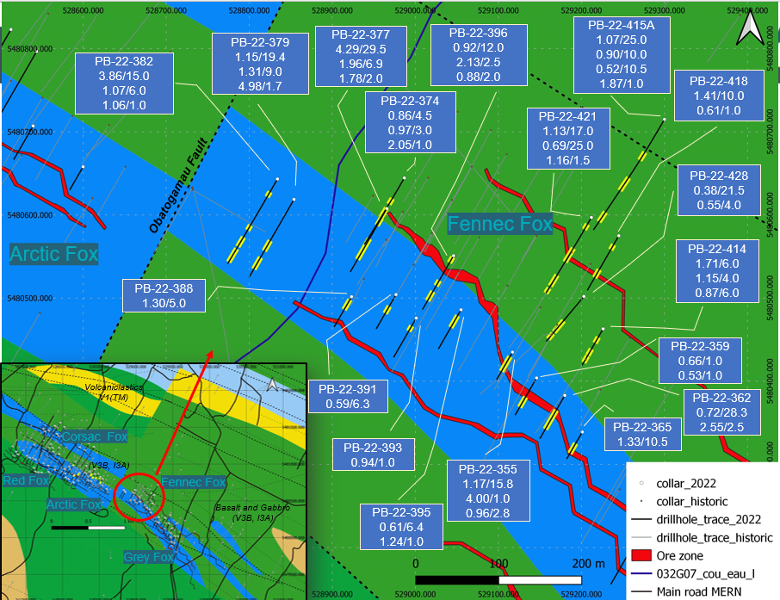 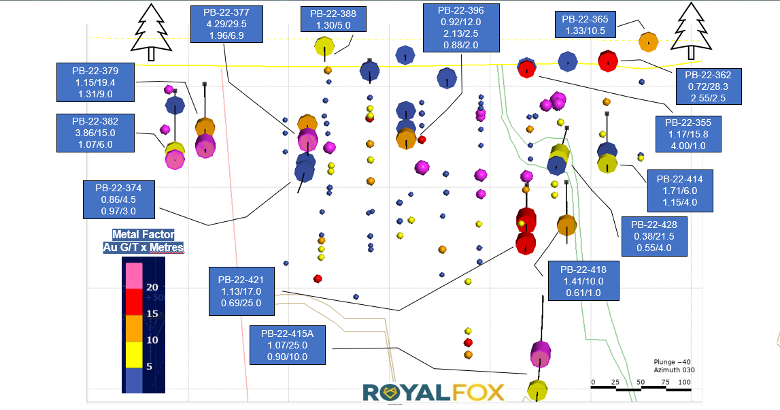 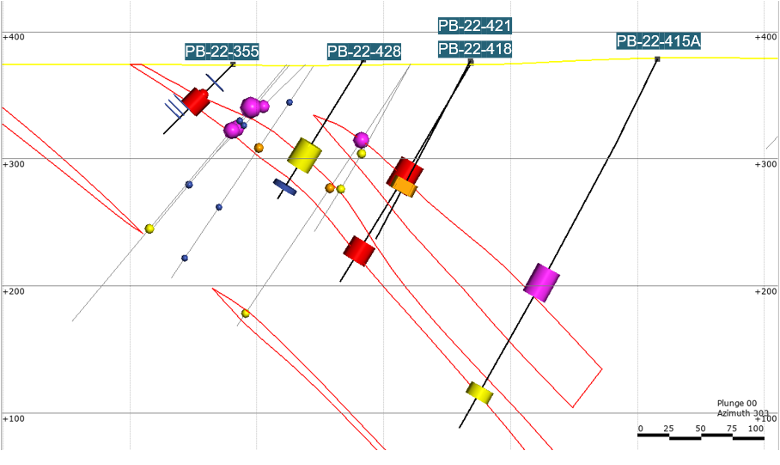 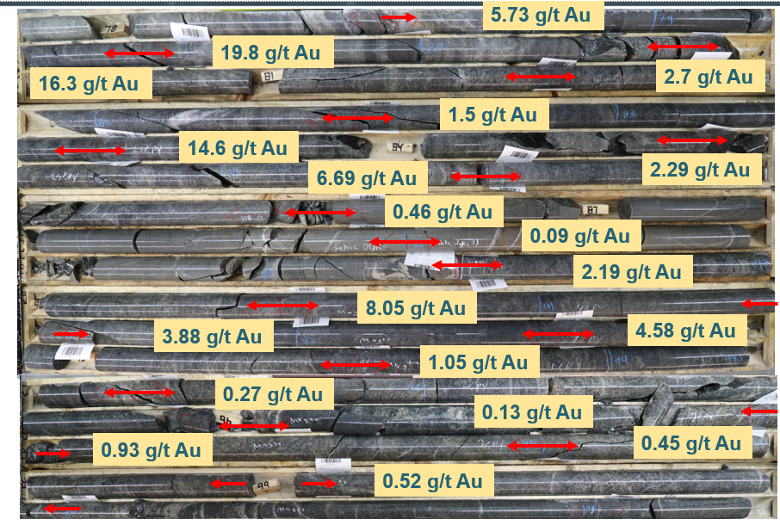 The technical content and scientific aspects of this press release have been reviewed and approved by Mrs. Adree DeLazzer, P. Geo., a Qualified Person as defined by the National Instrument 43-101. Mrs. DeLazzer is Vice-President Exploration of Royal Fox Gold and is not considered independent.

Royal Fox Gold Inc. is a mineral exploration company focused on the development of the Philibert Project near Chibougamau, Québec. The Philibert Project comprises 110 mineral titles having a total approximate area of 5,393 hectares of highly prospective ground, 9km from IAMGOLD’s Nelligan Gold project which was awarded the “Discovery of the Year” by the Quebec Mineral Exploration Association (AEMQ) in 2019.

To date, more than $10M (historical value) have been spent on the Philibert Project, with more than 60,000 metres of drilling completed. The Company is focused on de-risking the asset and releasing a maiden NI 43-101 resource estimate which will incorporate results from both brownfield and greenfield exploration, combined with extensive historical data. The Philibert Project is owned by SOQUEM. Royal Fox is currently undergoing an ownership option process, details of which can be found in the corporate presentation available on the Company’s website. More details are available in the corporate presentation of Royal Fox at: www.royalfoxgold.com.

SOQUEM, a subsidiary of Investissement Québec, is dedicated to promoting the exploration, discovery, and development of mining properties in Quebec. SOQUEM also contributes to maintaining strong local economies. Proud partner and ambassador for the development of Quebec’s mineral wealth, SOQUEM relies on innovation, research, and strategic minerals to be well-positioned for the future.

ON BEHALF OF THE BOARD OF DIRECTORS